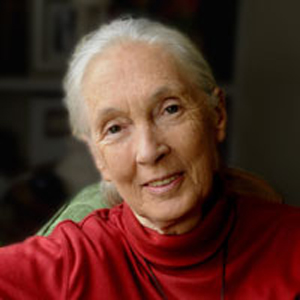 Founder of the Jane Goodall Institute and UN Messenger of Peace
Fee Range $50,001 - $75,000 *
* This specific fee falls within this range. Ranges are presented as a guideline only. Speaker fees are subject to change without notice. For an exact quote, please contact your Keppler Speakers representative.
Add to Favorites
JaneGoodallInst

In July 1960, Jane Goodall began her landmark study of chimpanzee behavior in what is now Tanzania. Her work at Gombe Stream would become the foundation of future primatological research and redefine the relationship between humans and animals.

In 1977, Dr. Goodall established the Jane Goodall Institute, which continues the Gombe research and is a global leader in the effort to protect chimpanzees and their habitats. The Institute is widely recognized for innovative, community-centered conservation and development programs in Africa, and Jane Goodall’s Roots & Shoots, the global environmental and humanitarian youth program.

Dr. Goodall founded Roots & Shoots with a group of Tanzanian students in 1991. Today, Roots & Shoots is active in more than 60 countries and since its inception has greatly impacted participants of all ages in over 100 countries. All of whom take action to make the world a better place for people, animals and the environment.

For the past 30 years, Dr. Goodall has been speaking about the threats facing chimpanzees, other environmental crises, and her reasons for hope that humankind will solve the problems it has imposed on the earth.

Dr. Goodall’s honors include the French Legion of Honor, the Medal of Tanzania, and Japan’s prestigious Kyoto Prize. In 2002, Dr. Goodall was appointed to serve as a United Nations Messenger of Peace and in 2003, she was named a Dame of the British Empire.