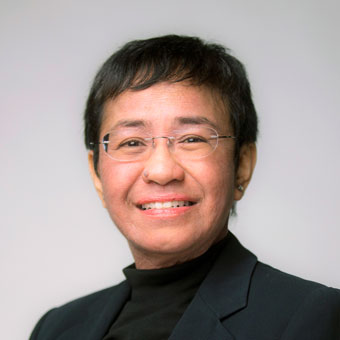 CEO of Rappler, Journalist, Author, Freedom Advocate and 2021 Nobel Peace Prize Winner
Fee Range $75,001 - $100,000 *
* This specific fee falls within this range. Ranges are presented as a guideline only. Speaker fees are subject to change without notice. For an exact quote, please contact your Keppler Speakers representative.
Add to Favorites

Maria Ressa is an award-winning journalist and the co-founder, CEO of Rappler.com, an online news organization in the Philippines.

Maria’s courage and work on disinformation and ‘fake news’ culminated in being awarded the 2021 Nobel Peace Prize in recognition of her “efforts to safeguard freedom of expression, which is a precondition for democracy and lasting peace.” Her numerous awards include being named Time’s 2018 Person of the Year and listed among its 100 Most Influential People of 2019.

Maria advises organizations and corporations on corporate governance, values, and strategy. Her experience as a journalist and an entrepreneur in the digital world makes her a sought-after keynote speaker and panelist.

A journalist for over 35 years, Maria has been arrested on 10 charges related to exposing the Duterte government’s corrupt practices and was convicted of cyber-libel in June. She is out on bail pending her appeal but true to form, Ressa, vows to keep fighting.

Maria was featured in the 2020 documentary “A Thousand Cuts,” which profiles her fearless reporting on the abuses of Duterte’s presidency, while also illustrating social media’s capacity to deceive and entrench political power. Maria now travels the world speaking to organizations of all kinds on freedom of the press, democracy, and corporate governance.