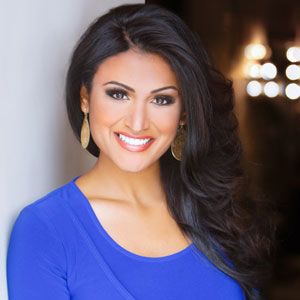 Miss America 2014 & Advocate for Diversity And STEM Education
Fee Range $10,000 and Below *
* This specific fee falls within this range. Ranges are presented as a guideline only. Speaker fees are subject to change without notice. For an exact quote, please contact your Keppler Speakers representative.
Add to Favorites
NinaDavuluri

One of over 14,000 young women vying for the coveted title of Miss America 2014 (and its $50,000 scholarship award), Nina Davuluri gained international acclaim when, representing the state of New York, she became the first contestant of Indian descent to win the crown.

During her year of service as Miss America, Davuluri logged 250,000 miles traveling across the country to address an array of audiences on her platform: “Celebrating Diversity through Cultural Competency.” As part of her consciousness-raising efforts on behalf of diversity, she also launched a social media campaign, Circles of Unity, to encourage constructive and civil dialogue on diversity issues. Davuluri is proud to have delivered her message of inclusion at more than 30 universities, including Harvard, Princeton, Yale, Duke, and University of Pennsylvania.

Davuluri's talk primarily focuses on her experiences growing up as a second generation Asian American. Although born in Syracuse, NY, she spent most of her childhood in rural Oklahoma and Michigan. From a young age, Davuluri realized she was culturally different and wasn’t part of the stereotypical “American Family.” As the only person of Indian origin in her classes for many years, she saw many forms of prejudice and misconceptions about communities of color. She often found herself engaged in conversations with classmates, correcting stereotypes and media images. “Celebrating Diversity through Cultural Competency” is intended to spark a conversation about diversity, inclusion, and assimilation.