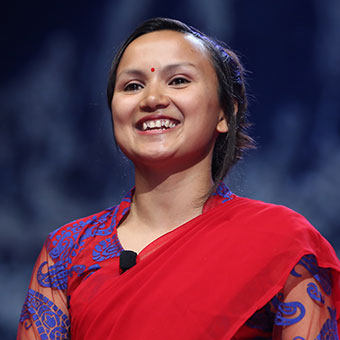 Leader of First Female Team to Climb the Highest Peak on Every Continent, the Seven Summits Women Team
Fee Range $10,001 - $20,000 *
* This specific fee falls within this range. Ranges are presented as a guideline only. Speaker fees are subject to change without notice. For an exact quote, please contact your Keppler Speakers representative.
Add to Favorites
comicontop http://www.shaileebasnet.com

The leader of the first all-women team to scale the highest peak in every continent, Shailee shares inspiring lessons on ambition, courage, leadership, teamwork and success.

Life is a journey from ignorance to wisdom. So too are climbing expeditions and leadership missions. Shailee Basnet

In spite of their proximity to Mt. Everest, not many women in Nepal climb mountains. Shailee Basnet is an exception. After she completed her first summit of the world’s highest mountain, she led the Seven Summits Women Team. Shailee and the other members of the team rotated between summiting and on-the-ground support roles, ultimately completing all seven climbs as a team—making them the world’s first all-female team to scale the highest peak on each continent.

Today Shailee leads executive leadership treks in the Himalayas and speaks to executives and teams around the world sharing the lessons learned from her epic missions on leadership, teamwork and dealing with conflict together with key takeaways on what makes a team “a force,” why mountain leadership translates so well to business, why the ego must take a back seat to the goal, and why diversity in a team’s makeup is critical to its success.

Shailee and her team have been featured on news, sports and entertainment media platforms around the world, including the BBC, PBS and ESPN. The 2019 French documentary Les belles envolées tells the story of the team’s journey to “break the glass ceiling” that has kept women from climbing the highest peaks. Shailee has been a guest lecturer for multiple business programs, including the NYU Business program and the Entrepreneurial Master’s Program. She is also in demand as a speaker for international organizations such as the World Bank, the United Nations and NGOs, and for non-profits, government and university audiences across the world.

In addition to her work with business teams and leaders, Shailee runs a program to empower young Nepalese survivors of sex trafficking and encourage more women in Nepal to climb mountains and achieve their dreams. She is also a standup comic in three languages, and she brings her warmth, high energy and sense of humor to deliver inspiring and unforgettable keynotes on teamwork, leadership and motivation.