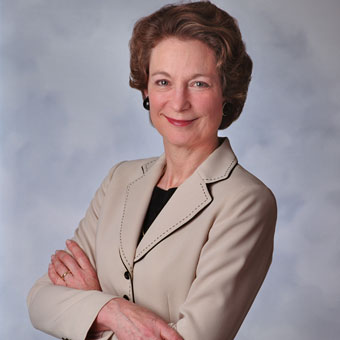 Strategic Energy Policy Leader and International Affairs Expert
Fee Range $20,001 - $30,000 *
* This specific fee falls within this range. Ranges are presented as a guideline only. Speaker fees are subject to change without notice. For an exact quote, please contact your Keppler Speakers representative.
Add to Favorites
http://www.susaneisenhower.com

Eisenhower, appointed a member of the U.S. Secretary of Energy's Blue Ribbon Commission on America's Nuclear Future, has also amassed 30-plus years of foreign affairs experience. She has served on NASA and DOE appointed commissions on space and nuclear issues for both Republican and Democratic administrations.

She is currently a member of MIT’s Energy Initiative Advisory Board and is former co-chairman of NEAC, the Secretary of Energy’s Nuclear Energy Advisory Board.

Eisenhower has shared her insights on CNN, Fox News and MSNBC -- as well as numerous shows, including "The Situation Room with Wolf Blitzer", "Hardball with Chris Matthews", "One on One with John McLaughlin", to name a few. She is the author of four books, including "Breaking Free", "Mrs. Ike", and "Partners in Space: US-Russian Cooperation After the Cold War", two of which have been regional bestsellers.
Whether speaking about the future of energy and infrastructure, international affairs, or leadership and politics, Eisenhower provides strategic critical thinking to organizations, business, and governments. The quintessential scene-setter, she authoritatively puts national and international public policy, past, present, and future, into context for a country in need of solutions and a clear direction.
Keywords: Policy Energy World Affairs Politics Leadership