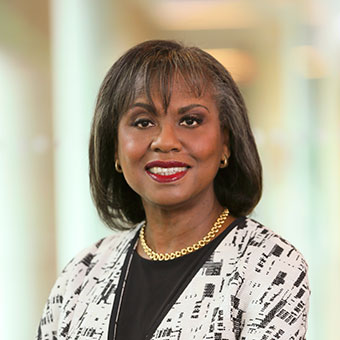 Anita Hill, University Professor of Social Policy, Law, and Women's Studies at Brandeis University, is a vital leader in both the civil rights and women’s rights movements.

In 1991, Anita made sexual harassment in the workplace a national issue when she testified that Supreme Court Justice nominee Clarence Thomas had committed sexual harassment against her. Today, Anita continues to push the envelope in pursuit of women’s and civil rights, teaming up with MacArthur Genius Award-winning artist Mark Branford and prominent academics all over the country.

Anita is collaborating with Mark Branford to create a 400-foot cycloramic painting in the Hirshhorn Museum in Washington, D.C. The painting will display publicly for the first time the lost text of civil rights activist Myrtle Evers-Williams’s would-be speech at the iconic 1963 “March on the Mall,” titled, “Tribute to Negro Women Fighters for Freedom.” Anita serves as Branford’s liaison to Mrs. Evers-Williams, engaging her in the creative process and seeking her blessing for the installation.

On the front of women’s rights, Anita is spearheading “Restoring the Vision”, a project to revive awareness of Title IX, the crucial law mandating equal education and employment opportunities for women. Anita will speak at businesses, universities including Radcliffe and leadership conferences including the Simmons leadership program that strive for gender equity. Combining these lectures with scholarship presenting stories of women in the academy, Anita will address the challenges women face in reaching workplace parity and highlight ways to increase women’s access to higher education.

“Restoring the Vision” will kickstart research and reform while empowering women to stand up for equal pay and education for years to come.

Anita keeps alive the legacy she bravely began in the early 1990s. She inspires the hundreds of students whom she has taught as University Professor at Brandeis and thousands more who follow her example in creating a better society in America. As long as women and minorities face discrimination in the U.S., for Anita Hill, there is more work to be done.