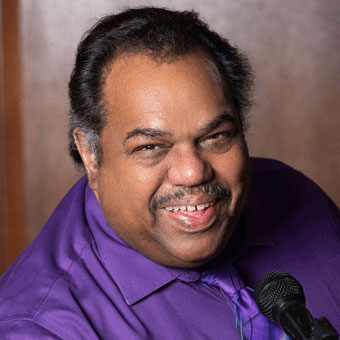 Musician, Author, Compelling Unifier, Klan Whisperer, and Award-winning Conflict Navigator
Fee Range $10,001 - $20,000 *
* This specific fee falls within this range. Ranges are presented as a guideline only. Speaker fees are subject to change without notice. For an exact quote, please contact your Keppler Speakers representative.
Add to Favorites
RealDarylDavis https://www.daryldavis.com/

His jaw-dropping experiences speak for themselves. For nearly 40 years, he’s engaged leaders of the KKK and White supremacist groups face to face to find the answer to a question: “How can you hate me when you don’t even know me?”

That question stemmed from his first encounter with racism at age ten when he was pelted with rocks, bottles, and soda cans by a handful of White spectators while marching in a parade. Seeking to understand, not to change minds, Daryl met their hatred with civility, patience, and listening. Those conversations spawned genuine and lasting friendships with many who changed their own minds and disavowed hateful beliefs. Some even gave Daryl their robes and hoods when they did.

A professional musician, Daryl graduated from Howard University with his Bachelor of Music Degree. He has performed extensively with Chuck Berry, The Legendary Blues Band (formerly The Muddy Waters Blues Band), and many others. While music is his profession, improving race relations is his obsession. He is known to many as “The Rock'n'Roll Race Reconciliator.” In addition to his career as a performing musician, Daryl is the owner of Lyrad Music, a music publishing and licensing business. He is also an actor of stage and screen and has appeared in HBO's highly acclaimed series The Wire.

As a speaker, Daryl is an extraordinary storyteller who inspires and empowers audiences with tools they can use to make better workplaces, communities, and relations with family and friends. Daryl’s work is chronicled in his book Klan-Destine Relationships and the documentary Accidental Courtesy. Daryl’s TEDx talk has over 12 million views.

Your presentation was riveting. You are such an engaging speaker and your story is powerful. We are humbled and inspired by the lessons you shared with us, and the knowledge that each of us can make a difference.