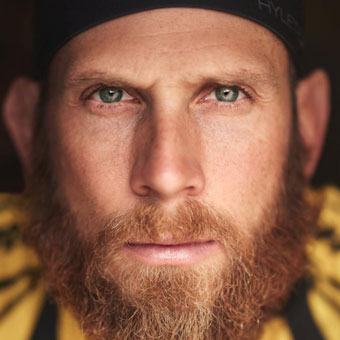 Elite Triathlete and Author of Redefine Impossible
Fee Range $20,001 - $30,000 *
* This specific fee falls within this range. Ranges are presented as a guideline only. Speaker fees are subject to change without notice. For an exact quote, please contact your Keppler Speakers representative.
Add to Favorites
ironcowboyjames http://www.ironcowboy.com

James “The Iron Cowboy” Lawrence’s combination of energy, humor, determination, and achievements captivates his audience and creates an inspirational and awakening phenomenon for all.

James earned his “Iron Cowboy” nickname because of the hat he wore during the marathon portion of his Ironman races so that his children could identify him quickly. In his book, Iron Cowboy: Redefine Impossible, James shares how, with two Guinness World Records under his belt, he wondered if he had truly found his mental and physical limits. He knew there was more. So, with his family in tow, he attempted to do what everyone said was impossible: 50 full-distance triathlons in 50 states, on 50 consecutive days—a feat that inspired the documentary Iron Cowboy: The Story of the 50.50.50, which was released in 2019.

Sports Illustrated ranked James among the “Fittest 50.” RedBull declared that “when it comes to endurance, he is unstoppable,” and Success magazine named him “The Most Enduring Man in the World.”

In 2021, The Iron Cowboy accomplished the impossible again, completing an even greater challenge, the Conquer One Hundred, a full-distance triathlon that takes over 100 consecutive days—140.6 miles a day for 14 weeks for a total of 14,060 miles.

His combination of energy, humor, determination, and achievements captivates and inspires. His story of reaching new limits is one everyone can relate to. He is an ordinary guy, whose extraordinary personal story will make you laugh, cry, and motivate you to reach for the impossible, achieve it, and then do it again.

From start to finish, our P&G Experience with James was phenomenal. He absolutely electrified our audience.