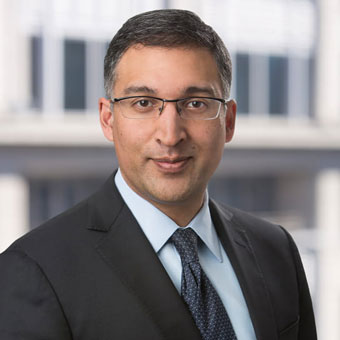 A former Acting Solicitor General of the United States and the only minority attorney to have argued as many as 45 cases before the U.S. Supreme Court, Neal Katal shares fascinating stories about the inner workings of the nation’s highest court and offers penetrating insights on the constitutional principles and decisions that have shaped our modern democracy.

Neal Katyal runs one of the world’s largest Supreme Court practices at a firm where he occupies the role formerly held by now Chief Justice John Roberts. He focuses on democracy protection, the Supreme Court, constitutional law, criminal law, intellectual property and blockchain technology. Former Acting Solicitor General of the United States (the federal government's top courtroom lawyer), he is also a law professor with more than two decades of experience at the Georgetown University Law Center where he was one of the youngest professors in the university’s history to have received tenure and a chaired professorship. At Georgetown, Katyal also serves as Faculty Chair of the Institute for Constitutional Advocacy and Protection. He has been a visiting law professor at both Harvard and Yale.

Katyal has received most every award a lawyer can win. In 2017, American Lawyer magazine named him Litigator of the Year. He earlier received the Edmund Randolph Award, the highest award the U.S. Justice Department can award a civilian. He has also been named one of the 40 Most Influential Lawyers of the Last Decade Nationwide by National Law Journal (2010); Appellate MVP by Law360 numerous times; and winner of the Financial Times Innovative Lawyer Award for 2017. Katyal has published dozens of scholarly articles in law journals, as well as op-ed articles in every widely read U.S. newspaper, and has testified numerous times before various committees of both the U.S. House of Representatives and the U.S. Senate. He is a graduate of Yale Law School and Dartmouth College, where he currently serves as an elected Trustee.

He is the co-author of Impeach: The Case Against Donald Trump with Sam Koppelman, which debuted at #2 on the New York Times Best Seller list. In 2020, Katyal gave his TED Talk How To Win An Argument (At The US Supreme Court, or Anywhere), which has more than 2 million views to date. Katyal is a frequent contributor to MSNBC and the New York Times, has been named one of GQ’s Men of the Year and has appeared on virtually every major American news program, as well as Showtime's Billions and Netflix's House of Cards (where he played himself).