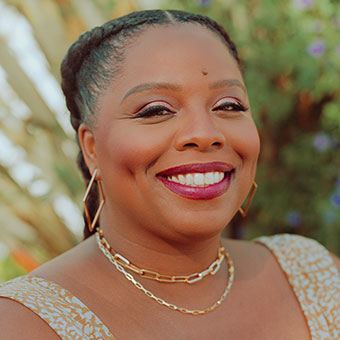 Co-founder and former executive director of the Black Lives Matter Global Network Foundation, Patrisse Cullors has been on the frontlines of abolitionist organizing for 20 years. Today #BlackLivesMatter is the banner under which this generation’s civil rights movement marches, and it is a call to activism nationwide. Now a global foundation supporting Black-led movements in the U.S., U.K. and Canada, the Black Lives Matter Global Network was a 2021 Nobel Peace Prize Nominee.

The author of the New York Times bestseller When They Call You a Terrorist and the soon-to-be-released 12 Steps to Changing Yourself and the World: An Abolitionist’s Handbook, Patrisse is an established community leader, social activist and performance artist who raises awareness through a unique blend of activism and politically expressive theater. A queer black woman, she delivers perspective on the adversities inflicted by social injustice, discrimination and the lack of accountability in law enforcement and discusses her commitment to being the voice for those who can’t be heard, educating and inspiring audiences to organize and stand together to transform society into a world where the lives and contributions of all individuals are recognized equally.

The New York Times called Black Lives Matter the “largest movement in U.S. history,” and TIME named Patrisse one of the “100 Most Influential People” in 2020. Patrisse has led multiple Los Angeles-based organizations, including Dignity and Power Now, Justice LA and Reform LA Jails. These organizations have won progressive ballot measures, fought against a $3.5 billion jail plan and implemented the first-ever Civilian Oversight Commission of the Los Angeles Sheriff’s Department.

Patrisse is also a former staff writer on Freeform’s Good Trouble series as well as an actress on the show. She also co-produced the twelve-part 2020 YouTube Originals series RESIST. In 2020, Patrisse signed an overall production deal with Warner Brothers; her goal is to continue to uplift and amplify the Black stories, talent and creators that are transforming the world of art and culture. Most recently, Patrisse served as an Executive Producer on the HBO MAX documentary Eyes on the Prize: Hallowed Ground, which documents the profound journey for Black liberation through the voices of the movement.